Eye of the Hurricane • August 2, 2020 • https://eyeofthehurricane.news/15082/feature-stories/reopening-schools/

Is It Safe To Reopen Schools? Here Are The Facts. 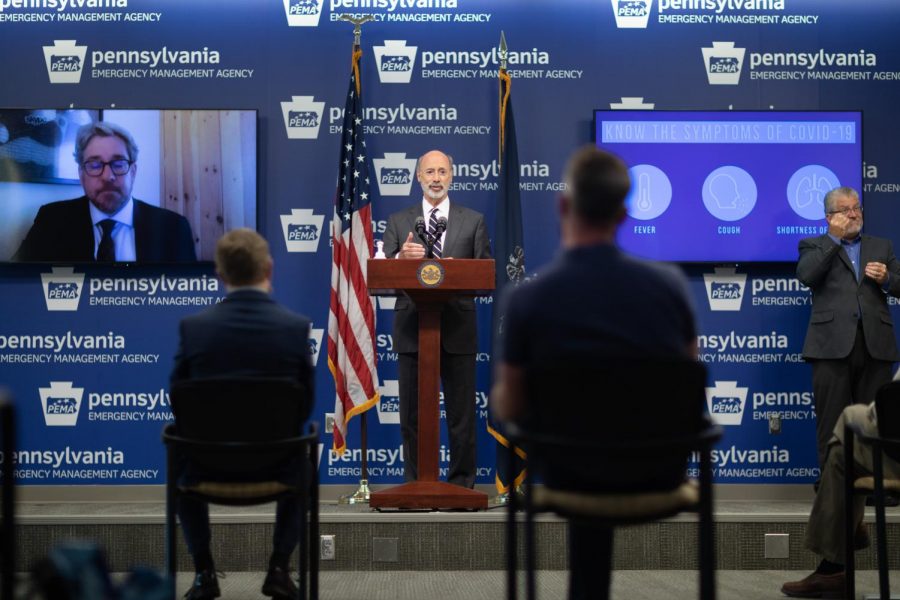 Pennsylvania Governor Tom Wolf speaking with the press. Governor Tom Wolf and Sec. of Health Dr. Rachel Levine today signed new orders for targeted mitigation efforts in response to the recent rise in COVID cases, primarily in southwest Pennsylvania, but also in other counties in the state, influencing the decision for statewide mitigation efforts for bars and restaurants, gatherings and telework. The new orders take effect at 12:01 a.m., Thursday, July 16, 2020. Harrisburg, - July 15, 2020

I have chosen to take some time out of my summer to write this article, as this is an issue that will affect mine, as well as my classmates’, upcoming school years.

For some background knowledge, the first case we saw in Lawrence County was way back on March 25, prompting schools to be ordered to be shut down for the remainder of the 2019-2020 academic year and a stay-at-home order to be put in effect. Some parts of Southwestern Pennsylvania, including Lawrence County, were amongst the first in the state to reopen and transition to the ‘yellow’ phase two months ago on May 8.

Not to mention that according to the Ellwood City Ledger, Lawrence County leads the state in the percentage of COVID-19 tests coming back positive, with a rate of 7.4% within a one-week frame. That is much higher than other local counties, such as Beaver County, which previously led the state for the prior two weeks.

Why are these case counts skyrocketing? A decent amount of these cases are from Long-Term Care Facilities, sadly. In Lawrence County, 41 residents are reported to have COVID-19 at these facilities, as well as 25 staff members. But that only accounts for a little more than a quarter of the total cases in Lawrence County in the past month. It isn’t because of restaurants or stores being open nearly as much as it is just simple carelessness among the general population. Many residents in the county have gone on vacations without taking many precautions. Not to mention the significant amount of fake news being spread on social media platforms such as Facebook that will claim masks are not helping at all to prevent the coronavirus (they do) and that breathing in your own oxygen is bad for you (it isn’t).

So… is it safe for students to attend school in New Castle? Unfortunately, probably not until at least December. It does make me sad, but for the health of the public, it might be the best option to try virtual learning. I think the best option is to have required daily Zoom meetings or livestreams of classes of some sort. Teachers do need to interact with the students in-person – that’s how learning is supposed to be. For everyone that wants to argue that schools are safe, here’s some data to back me up.

This past week, the New York Times has put out a series of articles discussing the risks of COVID-19 at schools. One, in particular, discusses the estimated infected people arriving in the first week of school by county. It says that Lawrence County could have up to 4 infected people arriving per 500 students. As New Castle High School is a school with approximately 1,500 students, this means that up to 12 people could arrive with the virus – some might not even know that they have it. This creates essentially a breeding ground for the virus, which could attract to surfaces that are not cleaned properly.

Furthermore, one of the first schools in the country to reopen didn’t even make it a day before being forced to shut down. I’ll let you read that by clicking here.

Plans have been recently made by the superintendent recommending a virtual school setup. While the district’s coronavirus task force had proposed detailed plans for in-person schooling, the recent rise in cases has prompted her to intend to propose a resumption of virtual learning from home, starting August 31st, and until further notice. Upon approval from the school board, it will introduce a style of virtual learning that was not as limited as it was in the spring. The plan is that teachers will teach the students via live-streams such as if they were in the classrooms, with time for questions, answers, and virtual testing.

Students at New Castle will have two options, as well. Option number one is that students will attend school online from home in the virtual classroom setting, or they could opt for an 18-week enrollment in the New Castle Cyber Academy, not using district teachers, but instead a partnership with Edgenuity. The district also will be providing free breakfasts and lunches to the students.

This, I believe, is in the best interest of children, faculty, and their families. Many of these children go directly from school to those who may be considered high-risk individuals, such as grandparents and those who are struggling with medical conditions.

Other local school districts have already announced their plans for reopening. Shenango was among the first in the state to do so, allowing students to choose between online learning and direct instruction. Union, however, has announced that ALL students will attend school virtually through at least October 5th. Wilmington is doing a hybrid virtual/in-person strategy. Ellwood City schools are giving three options: full-time in-person, asynchronous learning, or cyber school. Pittsburgh Public Schools are opting to do virtual learning only for the entire first nine weeks.

What About Working Families?

One of the biggest concerns with online schooling has to do with children with two working parents. Many of these parents do not have access to, or cannot afford a method of childcare that will permit their child to do online school work at an exact time. Some other children who do have access to relatives who can take care of them, however, might not have very tech-savvy caretakers.

Through the U.S. Department of Labor, the Families First Coronavirus Response Act allows up to ten weeks of paid expanded family leave at two-thirds the employee’s regular rate of pay. These ten weeks are available when a child whose school or care provider is closed needs assistance accessing their online work. This aid, as it currently is, lasts through December 31st, 2020. Employees could also potentially inquire with their company about performing telework, at the same pay rate as previously. Click here to be directed to the Department of Labor’s website to read more on the specifics of the FFCRA Act.

I want to prelude saying that my stance on whether or not sports should be played this fall differs from many people in New Castle. Rather than shutting down those who are against me, I will report the facts and allow my readers to form an opinion from there. I think it is crucial that everyone understands the factual side of this controversial topic, rather than just blatantly saying one thing over another.

On August 6th, Governor Wolf recommended that the PIAA suspend all sports through the end of the year. Many students, from all across the state, have portrayed their dismay at this recommendation. A petition resurfaced from the Spring that has since garnished over 75,000 signatures. Keep in mind that this is a recommendation, not a mandate, and the PIAA will make their own decision Friday.

So, here are the facts.

One of the most common arguments is “why can professional and college sports be played but not high school sports?”. The counter-argument is that with professional and college-level sports, these athletes can easily be quarantined from the public. With high school athletes, however, the schools can not afford to book hotel rooms for all of their athletes to stay in order to quarantine. These athletes must go home to their families after games and practices, which, given only one student at that practice had COVID-19, could lead to hundreds of additional cases.

Another argument: “Why can I go to work but not be permitted to play in a game of (insert sport)?”. Simply put, workplaces are much more ‘socially distant’ than most sports are. Many high school sports are contact sports, where touching is permissible. And not to mention that in many sports, particularly cross country, wearing a mask is simply impossible, as well as maintaining a distance from peers.

One common misconception is “the virus is only affecting the elderly and disadvantaged”. First and foremost, it is not only affecting those groups. Just one-third of COVID-19 cases in Pennsylvania are among those over the age of 60. While that demographic still account for most COVID-19 related deaths, there are still hundreds of deaths in Pennsylvania alone among those who are average people with no underlying medical conditions. Also, many student-athletes go from their practices and games directly to family members, which include children and working parents, many of which care for their elderly parents.

Whether or not to suspend fall sports in Pennsylvania, simply put, is not a one-size-fits-all strategy. The PIAA needs to identify sports that can maintain a social distance and keep their seasons together. Also, choosing to maintain fall sports could only be done if a certain criterion is met, similar to the algorithm that allowed counties to enter the ‘green phase’. Under that criterion, that means that within a 14-day span, there would need to be less than 50 cases per 100,000 population. For New Castle Area School District, this would equate to less than 12 cases within 14 days.

So it is definitely possible, but under current guidelines by the state and CDC, not immediately. It truly is a shame, but it is in the best interest of everyone’s health. Other states, which are seeing far fewer cases per capita than Pennsylvania are suspending fall sports for the time being. The people making these guidelines are not “clowns” or “evil” as many Twitter and Facebook self-certified disease experts are claiming. They just don’t want to see another spike in the case count.

The CDC recommends schools to consider implementing strategies to encourage the reduction of the spread of COVID-19. The top strategy listed is “Staying Home when Appropriate”. It states to actively encourage employees and students who are sick or recently have had close contact with someone who is sick to stay home. It advises the teaching of hygiene techniques, such as the washing of hands. The Pennsylvania Department of Health has made cloth face coverings mandatory in schools when they reopen. The CDC also advises the supporting of “healthy hygiene behaviors”, which includes adequate supplies of hand sanitizer, soap, paper towels, tissues, disinfectant wipes, cloth face coverings, and no-touch trash cans.

Additionally, it advises cleaning and disinfecting of frequently used surfaces at least daily, if not more often. It also recommends the discouragement of the sharing of items that are difficult to clean, properly working ventilation systems, encouragement of staff and students to bring their own water bottles to avoid drinking fountains, spacing seating 6 feet apart, skipping rows on schools buses, sneeze guards in reception areas, a plastic screen between bathroom sinks, and students eating in classrooms instead of cafeterias.

Other things they recommend include offering options for staff and students that are considered high-risk individuals, including telework and virtual learning. They also advise keeping groups of students together, staggering arrival and dropoff times, and having back-up staffing. They also recommend daily health checks such as temperature screening upon entrance of the building. The cancellation of major events such as Homecoming may also be required.

Overall, while I am saddened about the need to resort to online learning this school year, I feel that it is most beneficial for the health of the public. Schools could very easily become COVID hotspots, especially in elementary schools where kids don’t quite understand the need to wear a face covering. While tons of more research needs to be done on the matter, not just locally but nation-wide, I think currently it would be best to remain closed.

This article will be updated again once New Castle’s plans are approved.