Eye of the Hurricane • January 12, 2021 • https://eyeofthehurricane.news/15626/sports/the-philadelphia-eagles-completely-destroyed-carson-wentzs-career/ 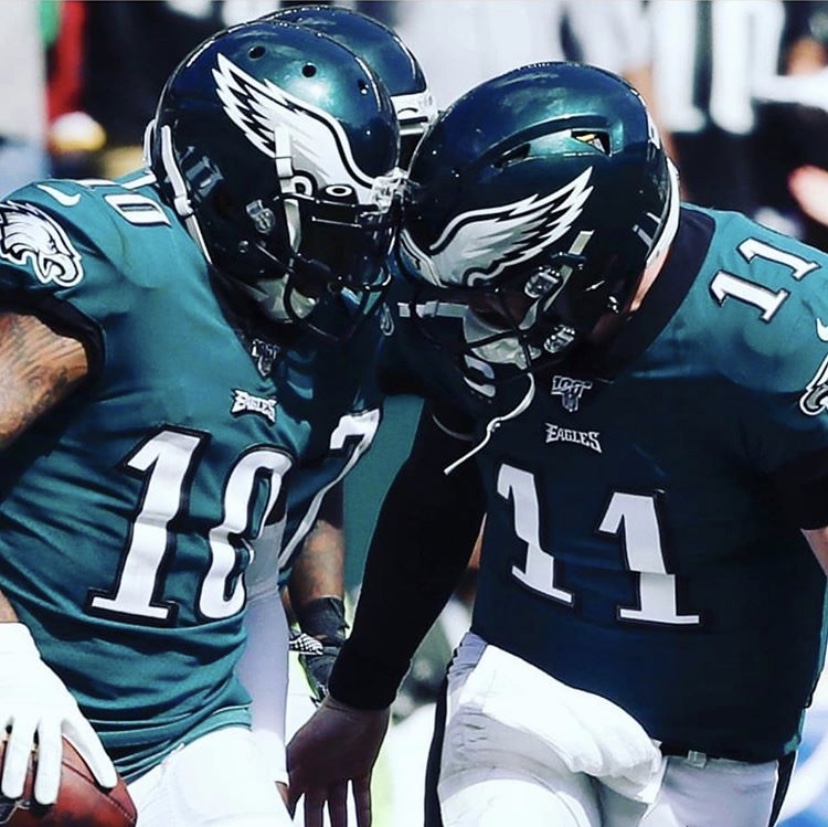 The Beginning of Carson Wentz’s Career

Carson Wentz came into the league in the 2016 NFL Draft as the second overall pick in the draft class, he was probably going to be one of the best quarterbacks ever, but little did he know the Eagles would make it seem that he would get taken care of in Philadelphia and be their franchise. Wentz had a pretty great start as he lead his team 7-9 as he also passed for 3,782 yards with 16 touchdowns and 14 interceptions. His year in 2017 was even better as he kept progressing and started to win over so many new fans and started making a name for himself as one of the top quarterback in the league as he took his team to 11-2 and sadly he tore his ACL which costed him for not being MVP as he had MVP numbers. With only playing 13 games in his second year in the NFL he put up 3,296 passing yards and an outstanding 33 touchdowns and only 7 interceptions, had he not got injured Tom Brady would not have won MVP as Carson put up just a little under Tom Brady’s numbers, but Wentz put up those numbers in 13 games it took Brady 3 more weeks to catch up to Wentz’s numbers and pass him to win MVP. Even without Wentz the Eagles had something to prove, they all had a chip on their shoulder as they were being called the “underdogs”, which they were because everyone doubted Wentz as well as the Eagles whole roster. Just in his second year he helped lead his team to the promise land and former Eagles quarterback Nick Foles finished the Eagles season for them, as they capped off the amazing season with a Super Bowl win and the Eagles first in their franchise history won a Super Bowl after a long draught.

The Eagles To Rebuild their Super Team in the Upcoming Drafts

The Eagles were in need of a lot of people to keep the super team they had especially to attempt and build a dynasty in Philadelphia, which all Eagles fans would hope, but it was very unlikely the outcome would happen. The Eagles needed to go younger in a lot of positions as they kinda had a lot of old players that would be soon getting close to retirement as well as not becoming as explosive as the players once were. The Eagles could make the team that would be a Super Bowl team if they drafted certain players in the 2017-2020 draft. The Eagles could have built one of the most dominant teams to ever be on the same field, but they sadly could not draft correctly as Howie Roseman; the Philadelphia Eagles General Manager struggled to pick great talent besides picking a star defensive end 1st pick 14th overall Derek Barnett, which is the only #1 pick the Eagles picked throughout the three years between the 2017-2019 draft. Everyone else they picked has either been a bust or there was someone better in the draft that they could have picked. The one that really hurts is the Eagles picking offensive tackle Andre Dillard in the 2019 draft, when they could have picked another position that had better players available. Especially being that the Eagles needed wide receivers and could have picked a freakish athlete at wide receiver in D.K. Metcalf as he did not go till round 2 pick 32 when the Eagles picked Andre Dillard and a complete bust of a wide receiver pick in the second round that was JJ Arecega-Whiteside as he could not get open nor catch any ball. The Eagles have not had a good draft since 2016 when they drafted Wentz pick 2. The 2020 Draft was probably even worse as the wide receiver class was incredible and would be very hard to land a bad receiver, but no fear the Eagles will make that a challenge as they go on to draft wide receiver Jalen Reagor who was mainly known for his punt returns and was not want the Eagles needed. The only one that really wanted Jalen Reagor was GM Howie Roseman, Owner Jeffrie Lurie and Head Coach Doug Pederson wanted wide receiver Justin Jefferson, but the Eagles got Reagor who was no where near as good or talented as Justin Jefferson. Already Jefferson has got 1,000 yards in just 12 games played in his rookie season. The Philadelphia Eagles have mentally and physically broken the franchise quarterback and their hopes to make a Super Bowl team for the future.

The Eagles say they will get Wentz weapons, and every time they say that, it’s almost as if they’re lying and giving us false hope. Wentz can be an amazing quarterback if they provided him with weapons. Other teams draft or trade for big name or a ton of talent at the wide receiver position as it is vital to make your quarterback have someone that will always be open, the Eagles have yet to do so. Their best receiver currently would probably be Greg Ward who has been the most productive receiver they have had in a while, but this guy never even played receiver in college and started his career at corner and that’s what the Eagles drafted him as, and being how bad the Philadelphia Eagles draft they made Greg Ward switch from defense to offense which is not very easy to do. He has definitely been a guy that Wentz can trust but over the years Wentz hasn’t had nay receivers get over 1,000 yards. The lack of receivers hurts Wentz more than people think, but they go to instantly saying Wentz is a bad quarterback, which can be true by looking at his stats, but look at his receivers he’s worked with in the years he’s been with the Eagles not very good receiving core and this quarterback made the best of it struggled and struggled and then in the 2020 season he is having is worst season but who is to blame sure Wentz can be to blame, but what is he supposed to do with the receiving core and the offensive line was all banged up at the beginning of the season and he leads the league in both interceptions and getting sacked. The struggle for Wentz is some of his part, but the Philadelphia Eagles have hurt him as Nick Foles came in and won the Super Bowl when that’s what Wentz wanted to do but he got injured and then them not picking any talent for Wentz to work with. Not to mention instead of drafting a wide receiver they drafted quarterback Jalen Hurts in the second round of the draft, which is like them shooting Carson Wentz in the foot, as they are making Wentz keep looking over his shoulder and forcing Carson to prove himself yet again. How much more can you ask this guy to do??? Not to mention getting rid of Frank Reich probably the reason the Eagles won the Super Bowl and because of Wentz’s MVP play that season. Reich carried the offense he was just what the Eagles needed on their side to help the offense, getting rid of him was a terrible move and they never signed an offensive coordinator, as Head Coach Pederson took the spot for offensive coordinator. He also did not help Wentz, if anything he made it worse because his play calling made us punt all the time and force nobody to be open as Pederson’s route combos weren’t that good and is a big part of the Eagles bad seasons and Wentz’s regression that should not have happened. Wentz’s career could have went down in history as one of the greats to ever play the game, but his career still isn’t over if the Eagles fail to provide him with receivers and if not he needs to leave Philly or he won’t be one of the best to ever play because the Eagles are holding him back from his full potential and going to the Indianapolis Colts to play alongside the guy that made Carson Wentz who he was in 2017 will restore his career and most likely will win another Super Bowl.

If you were Carson Wentz why would you want to play good if a team never drafts talent or surrounds you with talent especially the guy they want to be their franchise quarterback? As well as why would you want to be made to keep proving yourself when your team looks like they don’t believe in you? They drafted a quarterback in the second round because they must have doubt in their franchise quarterback instead of drafting a talented wide receiver in the second round.